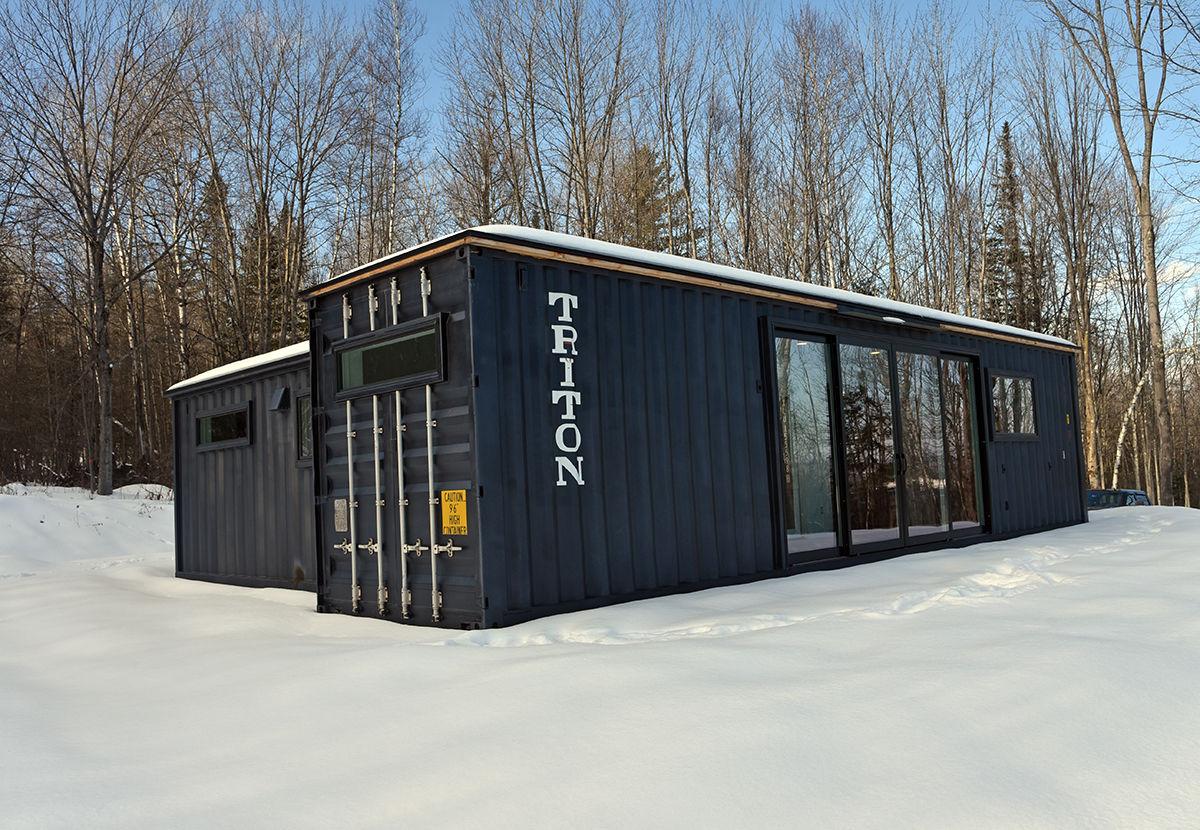 The small but chic home is created within three shipping containers, with finished walls and reclaimed barn board accents, and lots of windows that shed enough light on the interior that one forgets they’re in a box.

Sean Gyllenborg’s and Pam Cushman’s newest edifice is about the size of a small mobile home, and the main components in its construction are so mobile, they’ve come from halfway around the world.

There’s nothing pre-fab about this home in Morristown, however. Well, maybe the fab part.

The house is made from three shipping containers, one 40 feet long and two 20-footers. From the outside, the house looks like a set of large boxes with windows and doors.

Inside, you wouldn’t ever be able to tell you were living in a few boxes. Outside, you’ll never be able to forget it. Both of those sensations are purposeful.

Gyllenborg kept the white painted-on descriptors — maximum weight capacity, the blue American Bureau of Shipping decal, a yellow warning sign and the large stenciled vertical TRITON logo along the side of the 40-footer.

The containers are made of durable 14-gauge COR-TEN steel, the kind that is designed to form a layer of rust on the outside, thus protecting the metal from the elements. Knocking on the side of the house is like knocking on a bridge girder.

The hinges and brackets that would normally secure cargo are kept on for aesthetic purposes. Half of the 20-footer that houses the kitchen contains a shed accessible from the outside, which allows the shipping container to actually serve its original purpose — storing stuff.

“They have a lot of these things,” Sean said. “As in, a lot full of them. And they delivered them.”

From the inside, their home feels a bit like a hip urban flat.

Lunos air exchangers, one in the kitchen and one in the bathroom, alternate in whispery white noise. It’s like breathing, the soothing inhale, exhale sound and the actual practical purpose: circulating air that is incessantly fresh while keeping the place buttoned up and leak-free.

The home is heated and cooled via electricity, but since it’s so small and efficient — that east-facing window gets half the day’s sunshine to keep the living room toasty — it doesn’t take much energy to keep it comfortable. The hot water heater and the kitchen stove run on gas.

All the interior doorways have pocket doors that slide into and out of the walls. This particular model’s floor is made of a material called marmoleum, this one a gray color that reflects the industrial vibe.

The kitchen cabinetry and bedroom closet are from Ikea. The washer and dryer are combined in one unit.

More than half of the 40-footer’s length is taken up by massive windows — massive compared to the unit’s overall size, anyway — with two sliding doors opening onto what will, this summer, be a patio.

Right now, Sean and Pam’s 20-something son and his young daughter live in the home, but it would be the perfect bachelor pad or a home for a couple with few frills.

As of press time, the town hadn’t appraised the home’s value, although Gyllenborg said an appraiser had been out just the other day.

It’s small and durable, so it doesn’t cost much to insure, but the insurance company nonetheless had an interesting time trying to figure out a shipping container as a home.

“Basically, we insured it for what it would cost to repair,” Gyllenborg said.

According to Gyllenborg, a standalone model such as his can withstand up to 100-mph winds. If it were anchored, it could take 175-mph gusts.

“A bomb or a plane would have to hit it in order to have to rebuild it,” he said.

Gyllenborg said that if he and his wife and his crew were to build more units, each would be its own unique style. And since shipping containers are essentially recyclable material in America — it’s often more cost-effective to melt them down than ship them back — a house like Gyllenborg’s could be built fairly quickly and inexpensively, even with all the Ikea furnishings, electrical, plumbing and HVAC.

“I think three guys could build a shipping container home in six months for under $100,000,” he said. “I would build more of them, for sure. I think it’s a very affordable way to own your own home.”