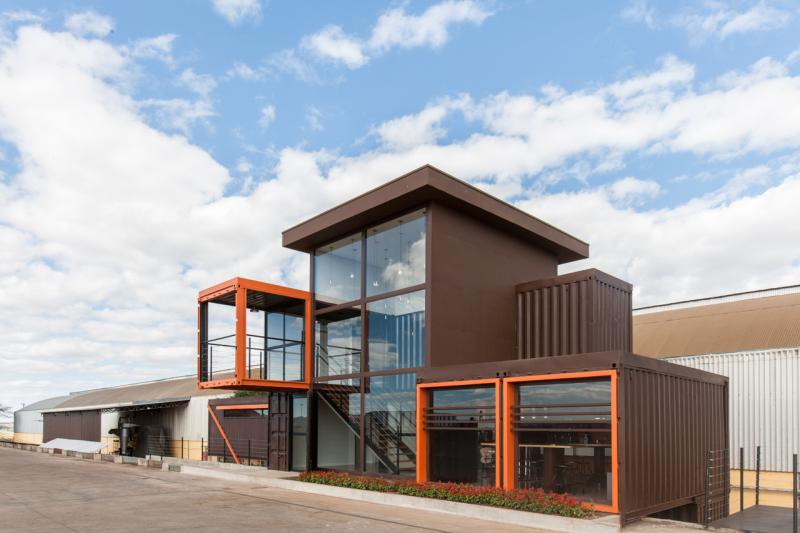 The Ipanema Coffees is a Brazilian company located in Minas Gerais, which produces and sells specialty coffees for the whole world. Its employees assisted visitors and buyers in a small room at Fazenda Conquista. To better receive them, the owners decided to create a coffee lab – a place where tastings, classifications and coffee quality control take place – which was specially designed by Sartori Design .

As sustainability was the premise of architectural design , the company owners requested that the new building be built in containers . “We had to create something impactful with a different volume, in which these containers gained prominence,” introduces Gabi Sartori.

Based on this concept, the Sartori Design team conceived the Ipanema Coffee Lab’s volume by stacking seven containers , which are now resting on each other, sometimes in balance.

“One of the biggest difficulties was marrying the structure of the building with its functions. Due to the specific use of the environments, we work the functionality of each one of them with the client ”, explains the architect.

One of the reservoirs, which serves as the base for the whole set, distributed the program’s main environments, such as the reception area, coffee roasting, showroom (visitors’ tasting), as well as the classification and tasting room.

With a large ceiling height, a glass curtain displays from the outside the metal staircase that leads the user to a gazebo, where you can see the entire dry yard of the coffee and Ipanema farm.

As Sartori states, the heart of the project is where the coffee roaster was positioned. By occupying the central part of the plant, this environment has easy access to the ends that accommodate the staff rating room on one side and the visitor showroom on the other .

After defining the layout , Sartori started thinking about the design of Ipanema’s Coffee Lab. As the containers have very peculiar characteristics, the inspiration leaned towards a more industrial and minimalist atmosphere with sophisticated touches.

The idea, therefore, was to reveal the container structures , including the inner area. As a result, some walls were left on display – as in the visitors’ showroom – while other partitions have brick and wood locks . This material also appears in the furniture, especially the test tables, which were made from old coffee tree trunks.

There is a lot of evidence that makes Coffee Lab Ipanema Coffess a sustainable project . In addition to reusing a material usually destined for disposal, Sartori has adopted solutions that can meet the thermoacoustic needs of containers .

The seven reservoirs have been treated with PET wool – a sustainable material that replaces the well-known rock and glass wool. In addition, the building has a green roof anaerobic biodigester system that treats water to be reused for garden irrigation. Photovoltaic plates are other sustainable attributes of the project.

Sartori Design built and intervened in two other secondary buildings of Coffee Lab Ipanema Coffess. On the same grounds was the former office of the company, which consisted of a house with a distinctive facade and compartmentalized environments.

The use of the building has not changed, but the goal was to renovate it aesthetically, proposing a new layout , expansion of the rooms and renovation of the facade. Thus, all coverings were replaced, with large format burnt cement being applied to the floors, as well as glazing on the boardroom partitions, freijó sheet and demolition wood in the joinery. Already in the facade were installed large glass windows and wooden frames.

Coupled to the house comes a new block, which was also erected in a container . Planned to house the trainee’s laboratory , the space received the same thermoacoustic treatment as the coffee lab, with internal walls lined with PET wool and green roof.