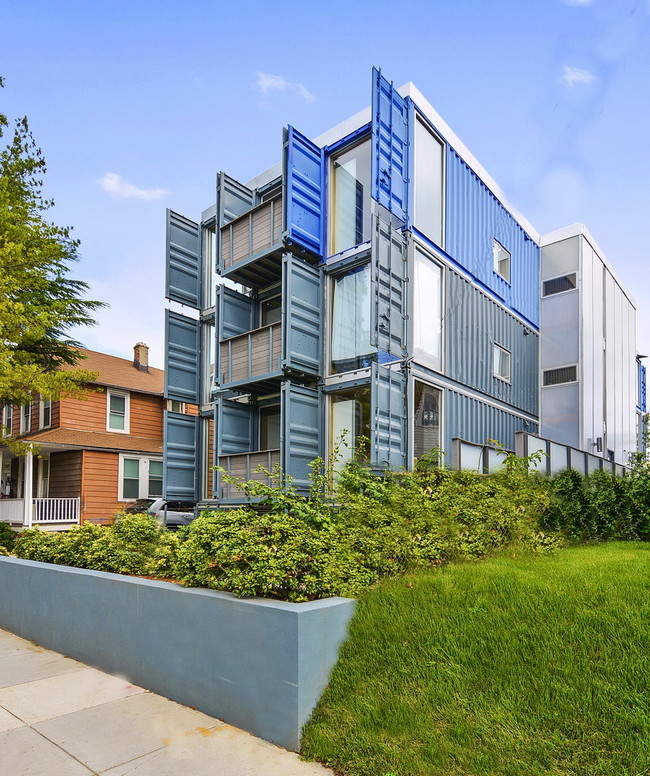 Today we will show you container house from USA.

The four-story, 24-unit apartment building made of repurposed shipping containers in D.C.’s Brookland.

D.C. is home to two other notable buildings made from sea containers, including El Rey, the Mexican beer garden on U Street, and Half Street Fairgrounds near Nationals Park. However, this is the city’s first housing project made of sea containers.

Architect Travis Price started construction on the project, called SeaUA, in July after Catholic University graduates Sean Joiner and Matthew Grace came to Price for help rebuilding a property they knocked down.

The apartments are designed as “shared housing.” Each floor has a large common area with a living room and a kitchen, plus six 240-square-foot bedrooms, each with its own bathroom and study. Six containers constitute a floor of the building, and they are lined up in two rows of three.

“There are over 700,000 sea containers sitting foul, going nowhere in the U.S. Remember, we imported all the stuff. All of your iPhones came in those containers, but we’re not sending anything back,” Price said in an earlier interview with WTOP.

The units have sustainable engineered wood interiors and incorporate other energy- conserving designs. The design is also an attempt to provide modern apartments to D.C.’s growing millennial population.

The project initially attracted some criticism from residents living in the Northeast neighborhood, which is known for its traditional bungalows and Victorians.

“We really try to bring out the spirit of the times and the spirit of the place; we’re not looking to do just garish things for the sake of shock. This is really well thought out,” Price said in response to the criticism.

Container Hacker explores all the container houses in the world for your valuable readers and shares them for your ideas.
Don’t forget to take a look at the structures made with other amazing containers on our site!

We invite you to send in your story and tiny home photos too so we can re-share and inspire others towards a simple life too. Thank you!
You can share this using the e-mail and social media re-share buttons below. Thanks!