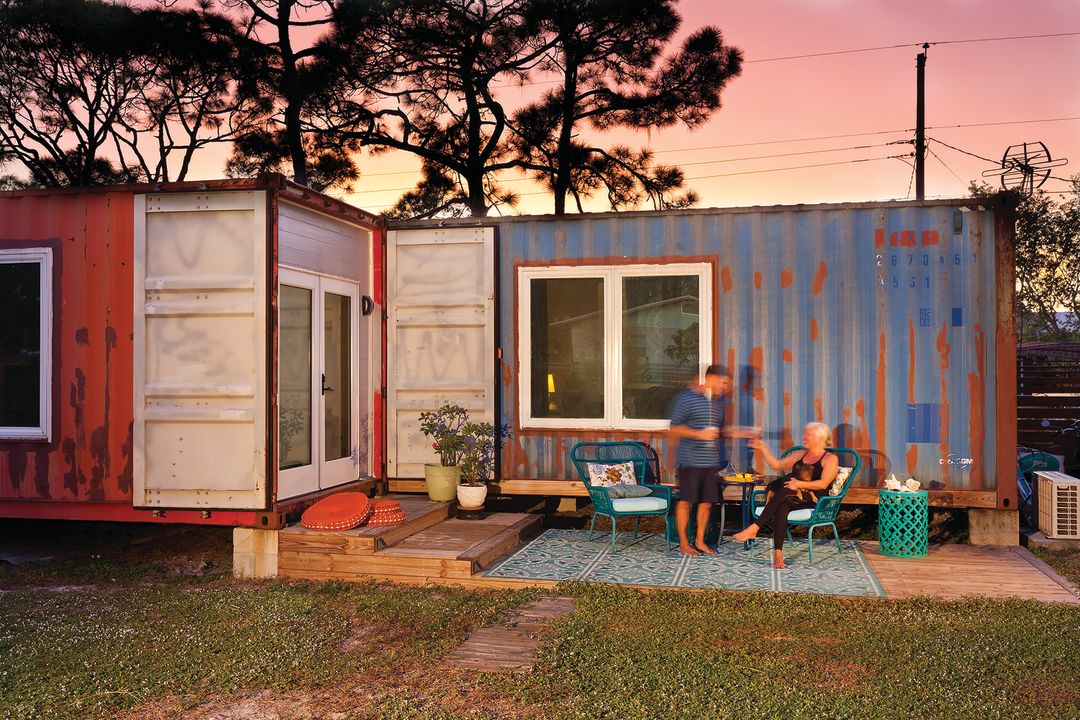 Today we will show you container house from USA.

Peek Inside the First Shipping Container Home in Sarasota County

Bill and Kathryn Birkholz have not just a new house but a whole new lifestyle.

Adventurous individualists are often drawn to small homes, and the really adventurous ones, like Bill and Kathryn Birkholz, build their own. They’re still settling into their shipping container home in Englewood. It’s the very first one in Sarasota County.

The couple first got interested in container homes back in 2015 when they were relocating from Pittsburgh to Florida. Saving money was a goal, but remodeling someone else’s design didn’t appeal to them. A container seemed the perfect solution: They could shape the new home to their own specific needs yet not spend anywhere near what a new home would cost.

Bill, a metallurgical engineer by profession, began devouring everything he could find on the subject, both in print and online. He experimented with various plans, outlining them on grid paper. “One container was not enough,” he says. “Neither was two. But three gave us everything we needed.”

They purchased the used containers at $1,200 each from a dealer in Bradenton and had them trucked down to the lot they had purchased on a quiet residential street in Englewood. Each of the three containers was 40 feet long, 8 feet wide, and 9 and a half feet high, for a total of 960 square feet of living space. Arranging the containers into the best configuration was like playing with a giant Lego set, Bill says. The couple finally decided on a “tuning fork” shaped configuration. One prong contains the entry and kitchen, the other prong houses the bedroom and bath, and in the middle, where the containers line up to create a 24-foot wide section, there is a living/dining area.

Although some container homes are set on a concrete slab, the Birkholzes’ is set on concrete piers, providing a crawl space underneath to access mechanical systems. The arrangement also allows for several step-down terraces that provide outdoor living areas—an important element of small home living. Reaction of the neighbors to the strange new industrial-looking structure has been mostly favorable, Kathryn reports.

Bill and Kathryn did much of the construction work themselves.

Bill, along with his father, had done remodeling before, and he was able to design the electrical and plumbing systems himself. The home is fully insulated and the interior walls are drywalled. The plumbing system is also conventional. A welder was hired to cut through the steel for the window and door openings. (Windows are standard stock sizes.) Air conditioning is supplied through a mini-split system.

The Birkholzes have not just a new house but a whole new lifestyle. They got rid of most of their possessions when they moved to Florida. The new house does not have much storage, and they want to keep it that way. “We pared way down to a small footprint,” Bill says. “We don’t want shelves full of things. And there’s plenty of storage in the kitchen. Good because we like to cook.”

They’ve left the exterior of the home as they found it—steel in a grooved configuration, still in its fading industrial colors. A new look is planned for the near future, with the entire exterior painted several different shades of gray.

Container Hacker explores all the container houses in the world for your valuable readers and shares them for your ideas.
Don’t forget to take a look at the structures made with other amazing containers on our site!

We invite you to send in your story and tiny home photos too so we can re-share and inspire others towards a simple life too. Thank you!
You can share this using the e-mail and social media re-share buttons below. Thanks!