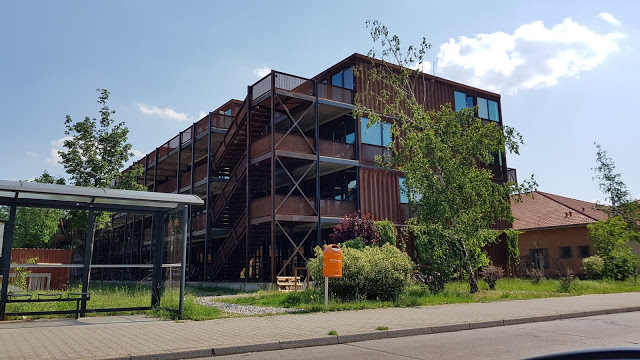 The name “Frankie & Johnny” is not only the name of the project, but is equally representative of two building blocks in the center of the overall system. Between these two parts of the building there is a multi-facetted lounge, which forms the “heart of the ensemble” and acts as a communicative meeting place. Seats, green arcaded galleries, connecting staircases and bridges invite you to linger in the communal area.

On the ground floor of the middle building a public cafe serves as a central meeting place for the shipping container student village. Event rooms for parties and concerts as well as studios and workshops are also planned in the program of the project. Between the parts of the building there are shared open spaces with different offers such as sports areas and various green areas with meadows and flowers.

The student village consists of 400 shipping containers with respective dimensions of 12.19 x 2.44 meters. The containers are initially equipped with bathroom and kitchen and then prefabricated as a modular system. Buildings consist mostly of single units, which can also be interconnected to shared apartments for two or three people. The individual modules are summarized on parallel, elongated lines. Individual container groups can be easily moved or rotated by 90 degrees, which gives the overall system a varied appearance.

That the term “container village” should not be equated with expressionless monotony and sober uniformity is shown by Holzer Kobler Architekten on the basis of its extraordinary project. By fine color nuances of the shipping container shell and an uneven facade design, the container system by no means monotonous, but rather reveals a picture of variation and diversity. Connecting staircases and open galleries provide attractive living areas and meeting places.

More than 420 container modules are stacked onto each other into three long volumes to make up the student dormitory Frankie & Johnny in Berlin Treptow. The CORE-TEN steel shipping containers, which are shifted slightly towards the outside and inside, produce a characteristic architecture and create at the same time a space for a lively and vibrant new form of cooperative living.

The High Cube Containers 40′, measuring 2,40 m x 12,19 m x 2,90 m (LWH) each, are prefabricated as a modular systems. The units can be connected into primarily single, but also double and double mini units.

The open air spaces, i.e. the access galleries between the buildings, form the heart of the ensemble. The communicative in-between zone is a place of meeting and exchange that serves as a common balcony at the same time. The compact central building divides the site into two open spaces of different character. Not only are there activity and sports areas, but also a green oasis of spacious lawn and trees. The name Frankie & Johnny stands for the residents – students from all parts of the globe – who live together in this one-of-a-kind location in Berlin.

The project was awarded the German Steel Construction Prize 2018 and the Architecture MasterPrize (AMP) 2018.