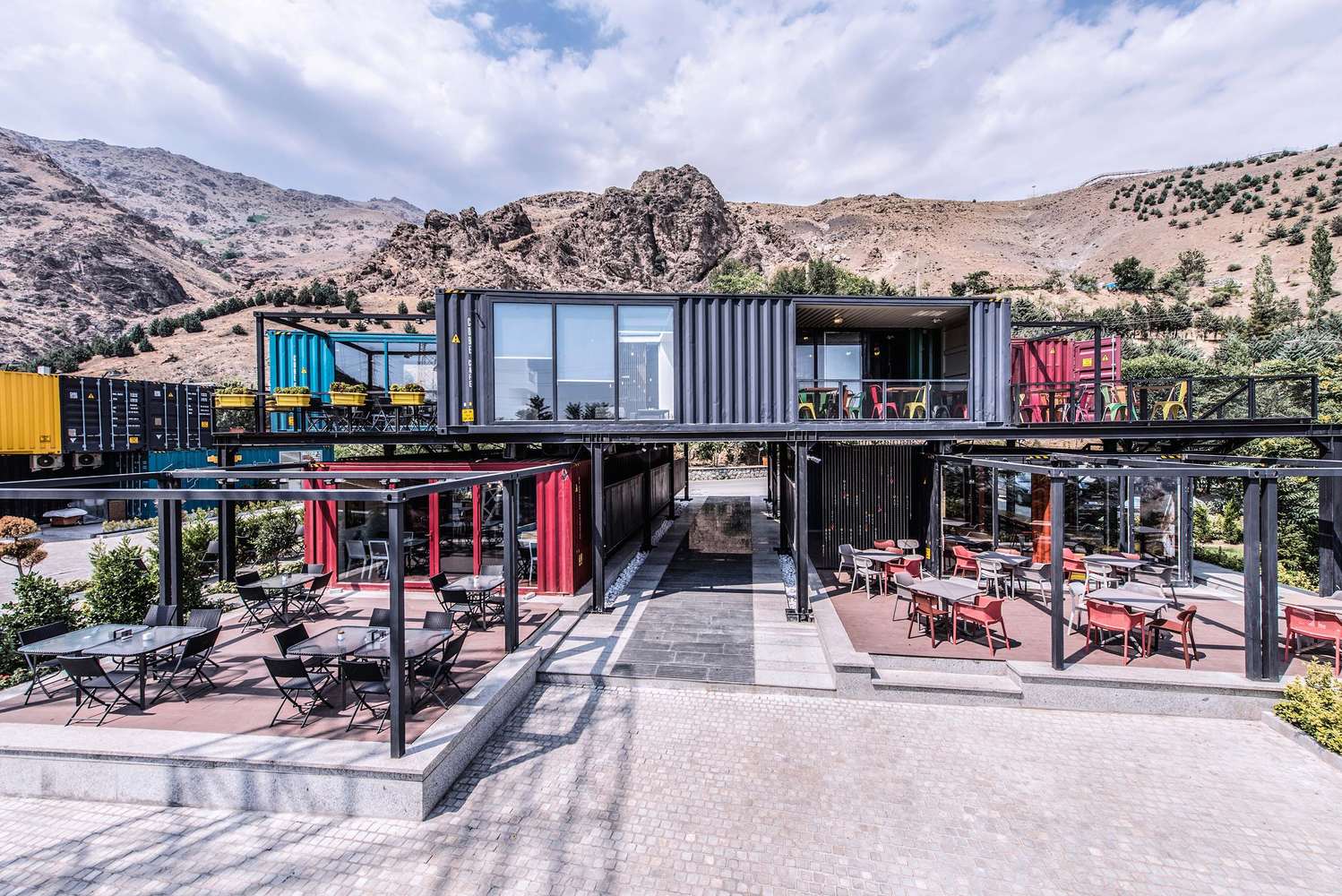 Tochal is a recreational place in Tehran that had remarkable development plan in recent years, thus the design of Cube Club was offered to us.

In this project we encountered with many challenges such as special design terms, client visions, financial and time constraints and special requirements of construction, after the mentioned items, opportunities and constraints becomes the main influential factors in design process.

By visiting the site, strengths and weaknesses Drew attention, lying on the mountain range and the nobility to the city was considered to be the characteristics of the site, preservation of the city’s view and existing vegetation were among the factors influence the locating.

Construction Criteria of Tochal complex only issued the license for light and temporary structures. Hence, in order to find a suitable solution to the challenges, The Initial ideas of using the shipping containers were formed. In addition to having a lightweight construction, using of containers was accelerating the process of construction.

Therefore, in order to maintain and tribute the natural environment against the artificial setting and also based on sustainable architecture paradigms and the Necessity of using recyclable materials and reducing the costs of construction, constructing with the used containers was proposed to client and After reviewing the details, it got on the agenda.

Shipping container architecture gets a lot of encouraging coverage in the design world as a trendy green alternative to traditional building materials, and seems like a smart choice for people looking for eco-consciousness.

According to the challenges and items mentioned, initial design formed with emplacing shipping containers beside each other with minimum interference in their basic structure and thus, containers as a modular unit with special standards becomes the main element of project in its architectural and structural design.

Locating the main forms on the site according to shape of the ground, view of the city, preservation of existing building, required applications and accesses was determined in three major zones, that the eastern zone includes coffee shop and restaurant, the southern zone includes manager office, service areas and crate climbing and the western zone is considered for escape room’s game. In each part above, forming and planning of project has been done according to achieve the best view, climate, sunlight direction in different seasons and pedestrian path. With the rotation of the upper containers in eastern side, the city view becomes the main spectacle and make pedestrians invited and attracted to the project and city’s view by creating an opening on the ground floor, on the other hand the independence of different sections of the project and its relation with Tochal complex is preserved, therefore spatial diversity achieved by creating open, semi open and enclosed spaces.

In order to achieve integration of inside and outside of the building, Maintain industrial identity of containers was considered as a principle in interior design and also due to the metallic nature of the crusts, some of containers were painted with vivid colors to confront cold and industrial atmosphere.