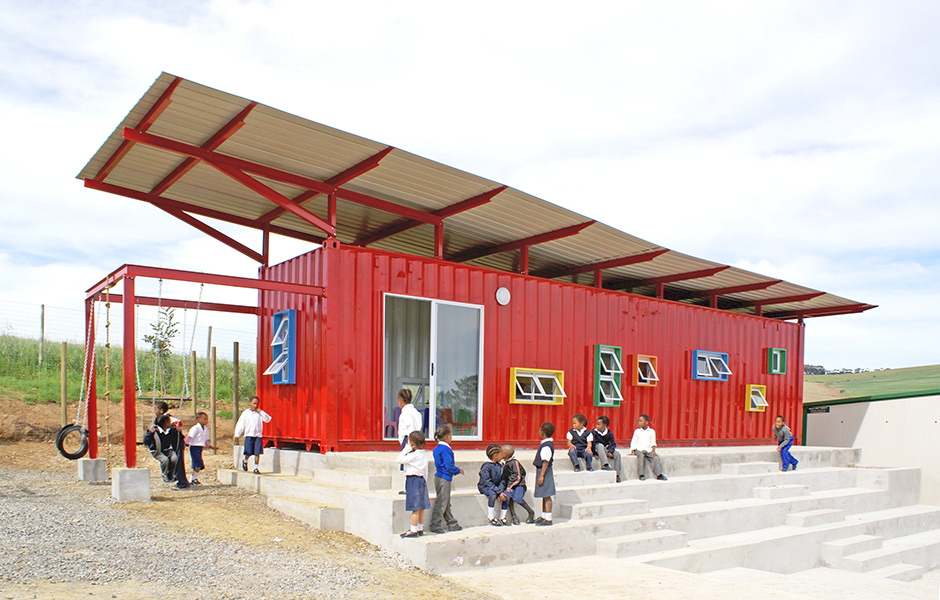 Let’s be clear. The idea of recycling shipping containers as bespoke pieces of micro-architecture is by no means unique to Tsai Design Studio, but its Safmarine Container Project – real, built, and in use – is no less admirable as a result. The 39-foot (12-meter) long, 538-sq foot (50-sq m) container is living a second life as a classroom for 5-6-year old pupils at the Vissershok School, Cape Town, South Africa.

The most radical addition to the container is a horizontal solar shade – an expansive second roof above the container preventing solar radiation directly arriving at the classroom’s outer surfaces thanks to the buffer of air between. This is an essential measure in warmer climbs as steel is an efficient conductor of heat. Were the building to be used at night it would probably have required extensive insulation too.

Windows and doors are obviously a requirement, but windows have been added to both sides to allow the through-ventilation of the space.

Attention has been paid to the surrounding site. A sloping embankment afforded the opportunity for the creation of an outdoor mini amphitheater, and an outdoor play area has been included, inspired by student Marshaan Brink’s design, an entry in a competition held by Woolworths, who along with AfriSam and shipping company Safmarine, co-sponsored the project. A vegetable garden has also been planted.

Of course, any opportunity to reuse containers in the developing world (or, technically in South Africa’s case, a newly industrialized world as of last year) should be seized where budgets are tight. But that’s just as true for the so-called developed world, too.